So why would I prefer to skip this exercise today? In large part, it probably was just a result of yesterday's engagements. Also, though, I would just prefer to read the newspaper (online, only – we don't get deliveries anymore) while sipping my espresso. 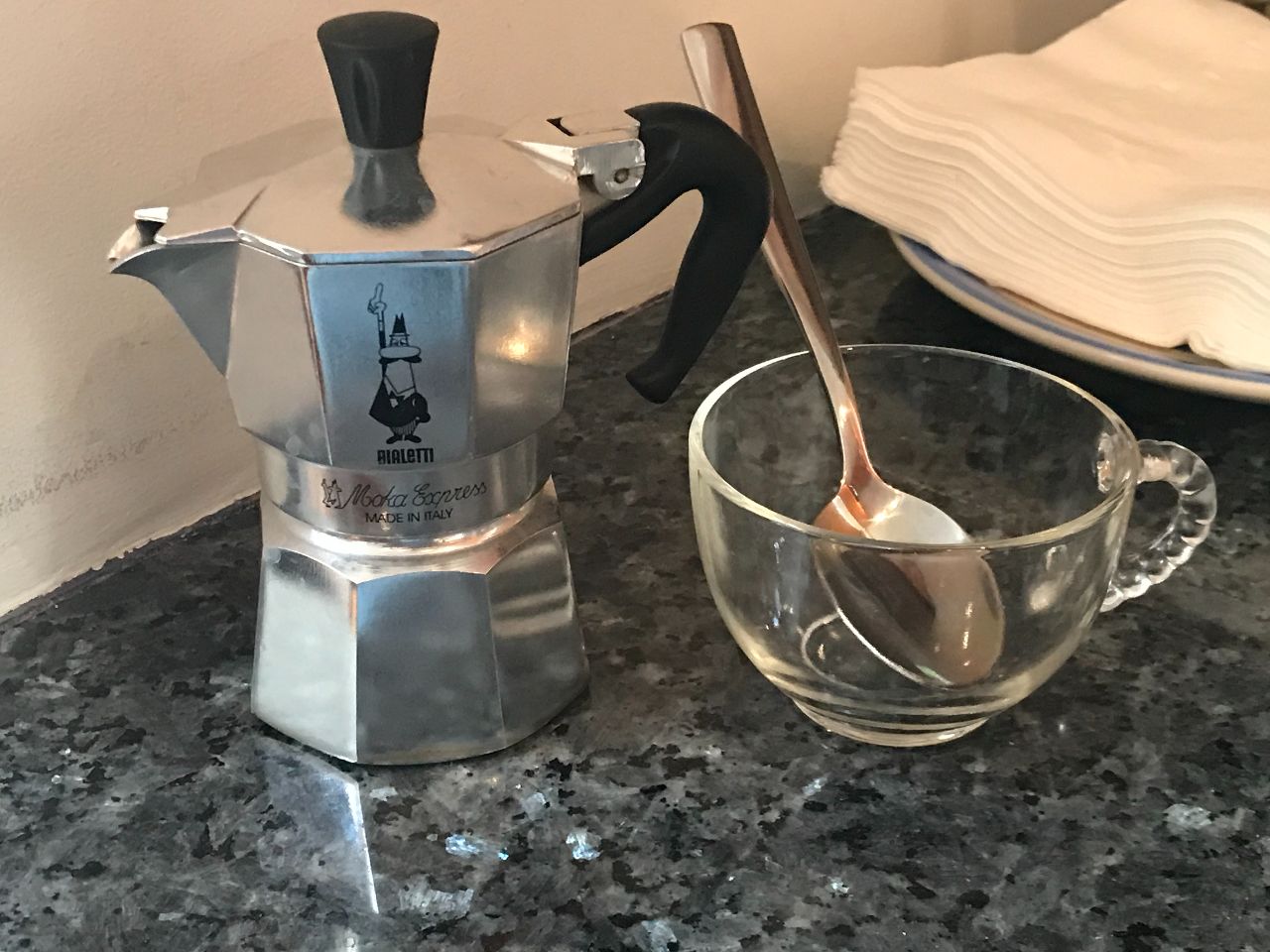 I'm not sure it is really espresso, though. I made it with the smallest espresso kettle I have, which produces about two ounces of espresso. However, it isn't just espresso because I pour it into a small cup that already has two ounces of warm milk and two teaspoons of splenda. After checking the hits on 'half milk and half espresso name' the google hits suggest that what I am actually making is a 'Café Au Lait'.

Anyway, I do get a kick out of the morning ritual – grind a small bunch of coffee beans into power, flatten the powder into the top of what I would call the 'filter tunnel', pour boiling hot water into the bottom half of the kettle, put the funnel in, screw the top half on, place on the caste iron heating plate under which the flames are heating it up and wait until you hear the steamy noise that telegraphs that all the water from the bottom has been pushed through the ground coffee into the top part of the kettle. When pouring out, it looks more like syrup than coffee which suggests it is far more concentrated than normal coffee. Pouring it into the small cup with milk and splenda already in it brings it near the top, with a nice layer of splenda-milk foam floating around. Because the milk was warmed in the microwave – not boiled – the drink is just the right temperature – not hot but not cool – just nicely warm.

So after drinking my morning café au lait I'm not hungry enough for breakfast. That is the effect of the café but also the psyllium husks mixed in a cup of water that I take first thing every morning with two vitamin pills. That way the pills don't go into an empty stomach, and my stomach will not feel empty for a while, especially after the café au lait follow-up.

As I write this I begin to feel the mild energizing of the caffeine – this is the only dose I take in a normal day, and I believe it is most useful in mornings as I am one of those folks who tends to wake up feeling sluggish and often not really wanting to get up. Often, this exercise would precede the psyllium/café consumption – I often just type on the chromebook while sitting in bed. Either way, the café and this exercise have become a standard way for me to get engaging in the day.

Why? Because I don't have to get up and go to work in the morning any more. I believe that when I was younger I felt the same way as now when waking in the morning – but having to shave and dress for work, get in the car (or on the subway) to get to work did force me to get going and of course, working in an office is a social experience that can also be energizing.

Yesterday morning I accompanied Kate to her parents' apartment in Port Washington. While there we made two trips to Atria on Roslyn Harbor, just several miles from their apartment. Atria is a senior living facility that will, hopefully, reduce the stress on Kate's mother by providing a number of services – meals, laundry, cleaning, etc – that can be increasingly difficult as one ages and especially if one's partner needs medical services as well. That is the case of Kate's husband, Robert Flanagan, who has been confined to a wheel chair for many months now due to surgery attempting to improve circulation in his leg to avoid surgery. After several hospital stays, it does seem like he might actually be physically improving – but he is also experiencing the mental deterioration that is common among aging folks. At times he is the Bob I remember from when Kate and I got together; other times, he is almost not present. Other times, when I am not present, he is miserable, especially at night, due to his loss of continence and failure to get up in time to get to the toilet.

As a result I have often been thinking about my own parents' departure. In some ways, they were fortunate compared to what poor Robert is experiencing. This a a reminder of the many ways we may end our journey on this earth....