Another sunny cold winter day. I woke up with Frankie sleeping next to me. 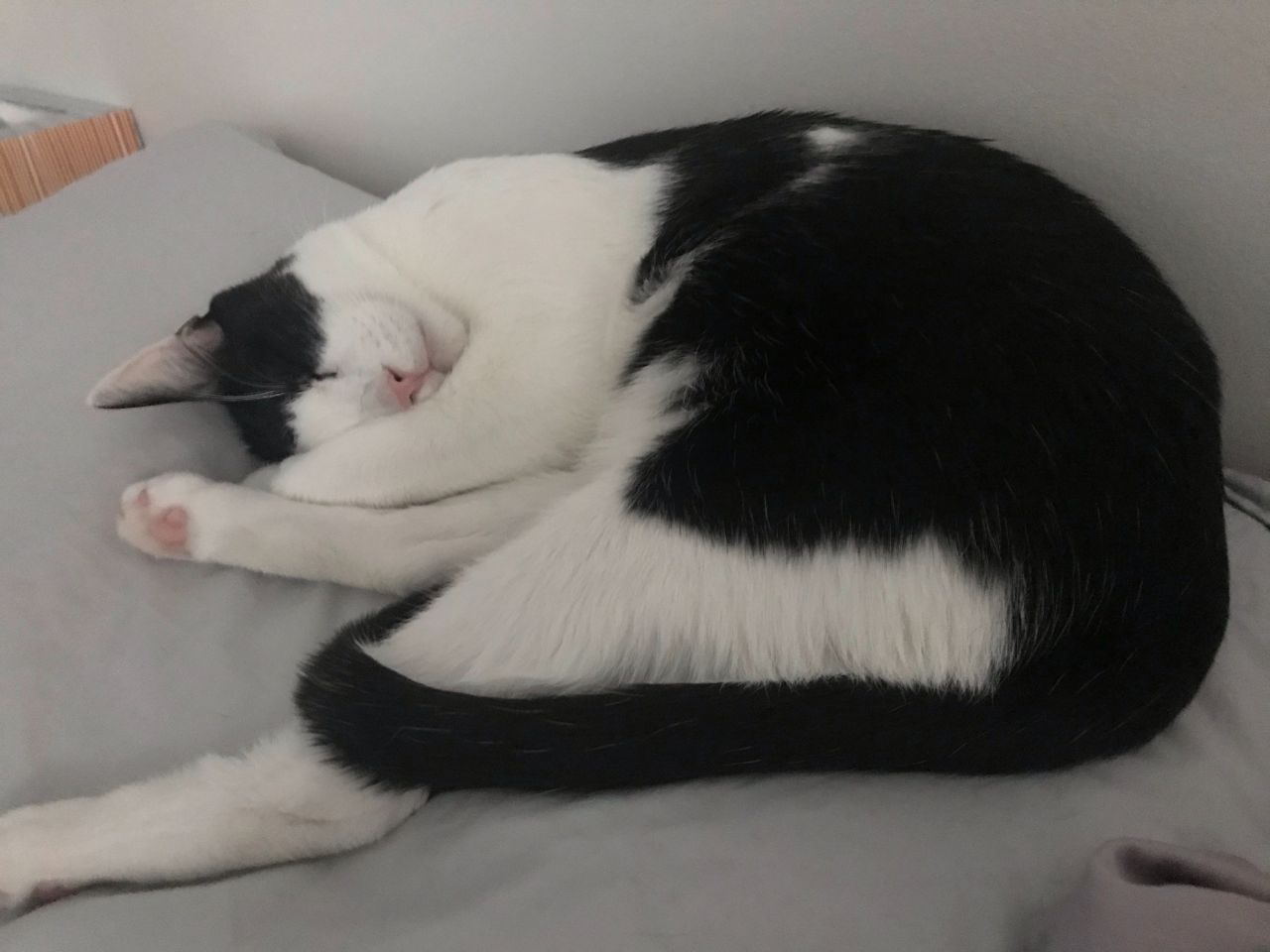 That often happens when Kate and I are both still sleeping – Frankie just curls up at the top of the bed between our two heads. However today, Kate had gone downstairs to wash her hair early, so Johnny had, of course, gone down with her because he loves to be near tubs full of water. Frankie, though, just remained curled up and asleep next to my head, which is not usual. Even when I got up to go to the toilet, he just remained there – when petted – initially – he did not react at all, but later when petted he rotated to direct the pet to his tummy. Now as I write he is flopped near my feet, which are under the cover to keep warm. It's a bit cool today.

This is an old building, one of three that were renovated in the early 80s to become a single cooperative housing facility, simply called 'co-op' in NYC. What the renovation did not include was either central air conditioning or thermostat-controlled heading. That would have cost too much for co-op prices in the neighborhood back then. What that means for us is we are constantly turning the heater valves up or down, depending on what it feels like. Many residents often open their windows to reduce the heat in the winter because it is easy to overheat the apartment. As for hot summers, well, it's either fans – especially ceiling fans – or air conditioners in windows. I imagine that getting a unit in our neighborhood with more modern heating and cooling would only be buying a condo in one of the tall new buildings – and I also imagine there is no way we could afford that kind of purchase. In any case, we are fine here, where we can take a long walk through Riverside Park, which functions as our backyard and walk to the local stores, neighborhood restaurants and bars, all just several short blocks away on Broadway.

Today will be another visit with a friend to Morgan Library and Museum. The museums are slowly opening up and allowing small numbers of folks to visit. Several weeks ago, on January 8, we met at The Shed for a gallery display called “Howardena Pindell: Rope/Fire/Water”. It was small enough that we didn't spend a lot of time there but it was the first time we were allowed to enter a public gallery space since things were shut down in March last year due to the pandemic. I've never been to the Morgan before, not that that actually matters – what matters is being able to do something with friends these days, given that restaurants only today are allowed to open up 25% of their inside capacity and bars are still absolutely closed, meaning Kate really misses karaoke sessions.

One of the things on my mind now is whether the fact that I posted yesterday's exercise has caused me to write this text more like for others to read as opposed to the way I have normally thought about it, text just to express what is going on in my mind, usually as a way to get started in the morning but also sometimes as a way to clear the mind for going to bed. So today I did not note my mood – which is fine today, as I apparently got a good night's sleep.

Oops, I just heard Johnnie downstairs, coughing as if to clear his through, with Kate sympathizing with him. I assume he is okay now as I now hear no more coughing – but for a cat to cough can be a bit disturbing, to say the least.

Frankie perked up at the sound and has apparently decided to go downstairs and check things out. Oops, I was wrong – he just got on the balcony stairs so he could look down to see what is going on.

It is time for me to actually get up, dress, and get ready for the day's activities, which include shopping for cat food among other things. Also, as usual, some co-op board-related activity, which I find increasingly tiring, especially now that we have resolved the biggest concern I had, which was refinancing to get us the money needed for major building renovations – facades, sidewalks and roofs. Also just catching up on email from friends and relatives.